The Supporters’ Trust performed The Entry into Jerusalem. Simon Tompsett (who had previously directed The Crucifixion for the Butchers) was appointed Director, with committee member Angie Millard as Assistant Director.

Angie very luckily got the services of Jonathan Brockbank as musical director – as well as playing accordion and violin for the Ebor Morris he had a fund of knowledge about folk dances and the South Yorkshire carolling traditions, and directed the singing and processional dancing by the cast.

The play was set just before WW1, and the cast plundered every charity clothes shop for miles around to find period (or at least, out-of-date) clothes, and assembled their own costumes under the close supervision of Jo Keogh and Izzy Carrick. Costumes were hired for a few of the burghers with speaking roles, such as an out-of-date police uniform, again to give a period flavour.

The set was designed by Mike Rogers and Richard Sheils, and was basically a ceremonial green arch, as would once have been set up in a town to greet royalty or other important folk, and was built on the waggon by the waggon-master, Dave al-Bahrani Peacock. 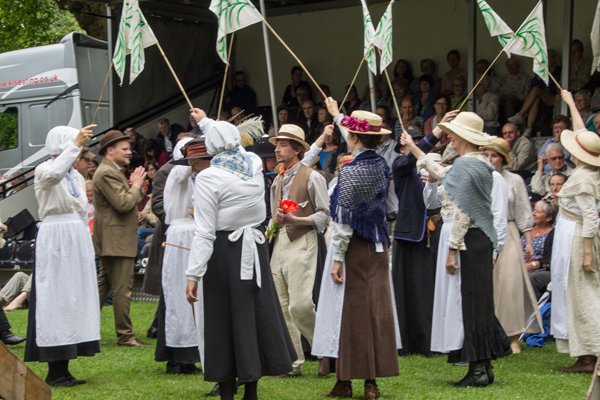 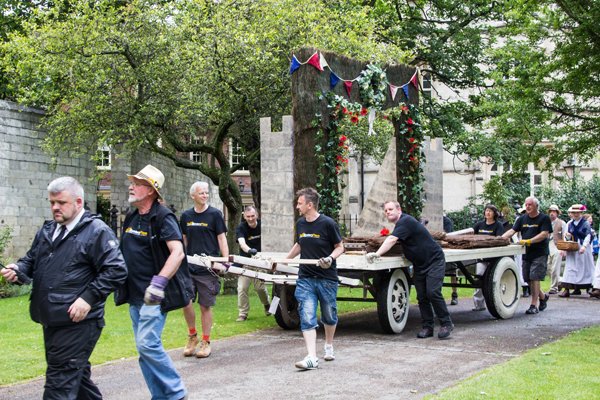 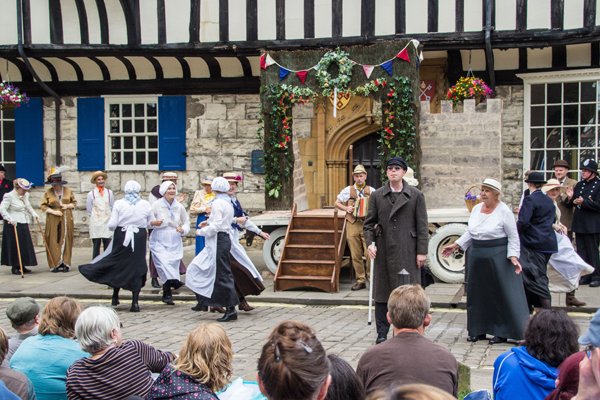 The 2018 Waggon Plays were held on Sunday 9th September and Sunday 16th with a midweek performance held on 12th September.

The Supporters Trust performed the Harrowing of Hell. We were delighted that Ben Prusiner accepted our invitation to direct the production. Ben is the artistic director of Re:Verse Theatre, which stages socially conscious productions of classical plays. He has directed in New York, San Francisco, Los Angeles & Japan, and holds an MA in Applied Theatre from the City University of New York. In York he has directed twice for the York Shakespeare Project (King Lear & Henry VIII) as well as Re:Verse Theatre’s Volpone, or Out-Foxed at Rowntree Park as part of the York International Shakespeare Festival.

Ben’s vision for the Harrowing of Hell involved the creation of a 4 metre high stage to create the fortress of Hell, ably designed and built by Dave al-Bahrani Peacock as Wagon Master. From this the devils, portraying 21st century sins, such as pollution, greed, war, surveyed and controlled the souls in torment. In addition to the Biblical characters in the text, souls represented the people of York through the ages: for example, judges, church people, suffragettes, with costumes designed by Aurelia Puigdomenech. Music from John Holt as a medieval monk with electric guitar provided a dynamic introduction and conclusion to the pageant. 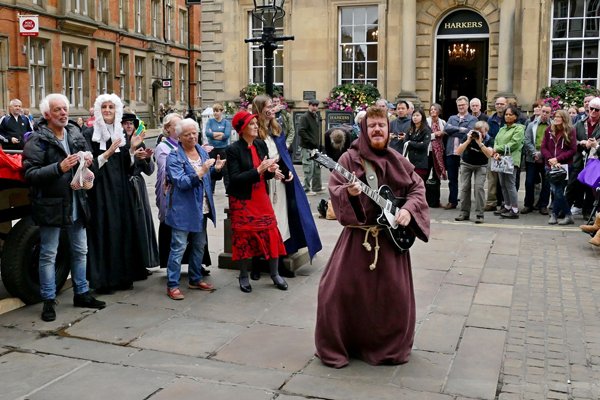 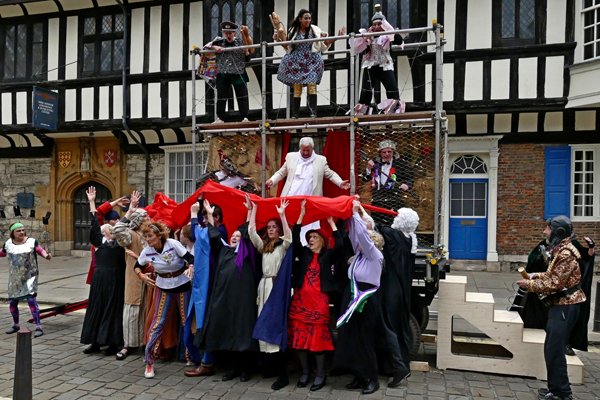 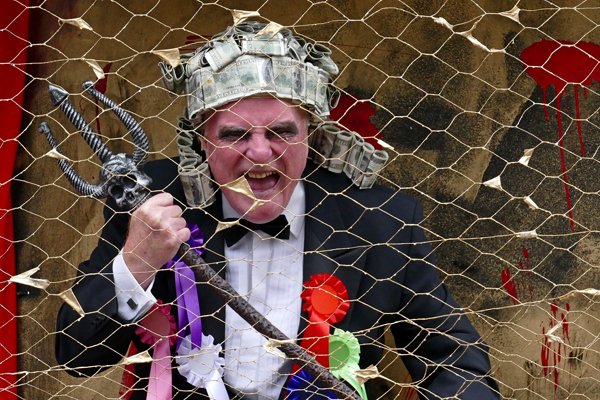 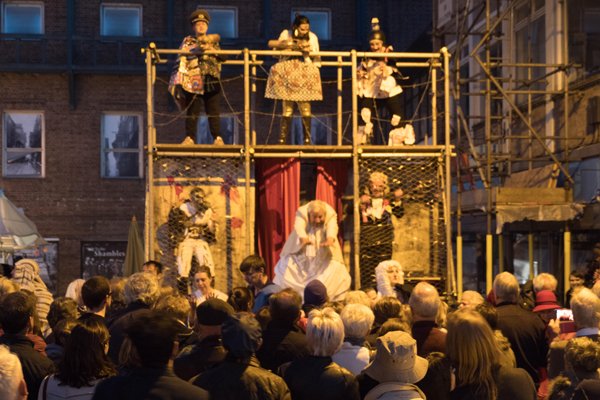 A Nativity for York

To learn more about our decision to stage an annual Nativity play, see our dedicated A Nativity for York page. 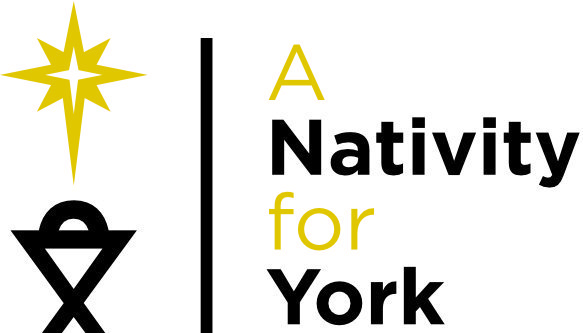 A Resurrection for York

A Resurrection for York was presented at The Resident’s Garden in Dean’s Park, York on 3 and 4 July 2021. A brochure was produced that illustrated the journey that this production took, all the people that worked together to make it happen and photos from the event. 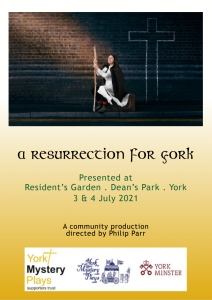 York Festival Trust arranged a festival of wagon plays on 19 and 26 June 2022 throughout York, and in the market on 22 and 23 June 2022.
There were eight plays altogether; YMPST worked with the Company of Cordwainers of the City of York to bring forth The Flood (for more, please see our dedicated page here: YMPST The Flood) 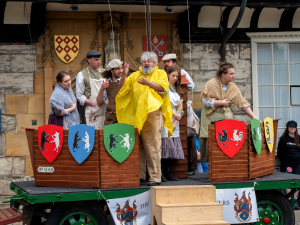 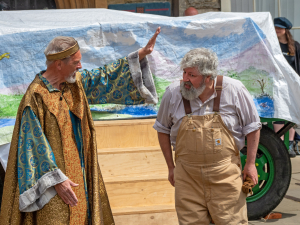 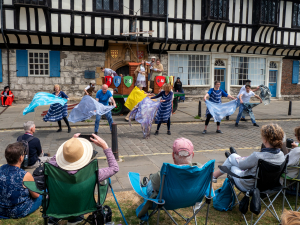 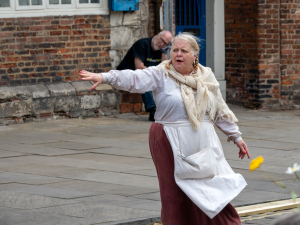 We are grateful to the work of our many supporters who helped at our stalls and cafe at St Crux on repeated occasions, carried out sponsored runs, held raffles, gave donations to fund both of our Wagon Plays and A Nativity for York.  It wouldn’t be possible without them.

This website uses cookies to improve your experience while you navigate through the website. Out of these, the cookies that are categorized as necessary are stored on your browser as they are essential for the working of basic functionalities of the website. We also use third-party cookies that help us analyze and understand how you use this website. These cookies will be stored in your browser only with your consent. You also have the option to opt-out of these cookies. But opting out of some of these cookies may affect your browsing experience.
Necessary Always Enabled
Necessary cookies are absolutely essential for the website to function properly. This category only includes cookies that ensures basic functionalities and security features of the website. These cookies do not store any personal information.
Non-necessary
Any cookies that may not be particularly necessary for the website to function and is used specifically to collect user personal data via analytics, ads, other embedded contents are termed as non-necessary cookies. It is mandatory to procure user consent prior to running these cookies on your website.
SAVE & ACCEPT
Go to Top